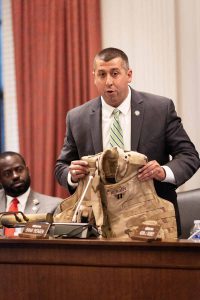 TRENTON, N.J. – Assemblyman Brian Bergen holds up the U.S. Army-issued body armor he wore as an Apache helicopter pilot while serving in Iraq during an Assembly Appropriations Committee hearing in Trenton, Thursday, June 23, 2022. Bergen said veterans would face three to five years in prison and $15,000 in fines for keeping their gear under a bill (A4369) moved forward by the committee that would ban its possession. (Assembly Republican Office/Jennifer Peacock)